One Easy Way To Tell Your Partner Is Cheating [Study] 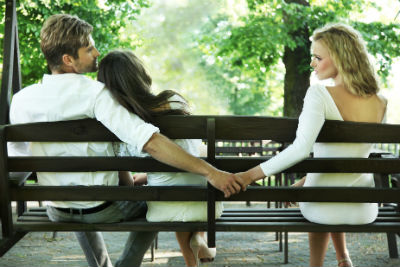 Many people who filed divorce forms over infidelity believed they could tell when their partner was cheating based on “gut instinct.” And while the gut is usually proven right in such cases — even if the brain doesn’t want to acknowledge it — a new study has revealed that it may not be gut or brain responsible for the discovery, but a partner’s voice.

In the study, researchers from Albright College asked 24 people to phone friends of the same sex as well as romantic partners. The goal: to monitor voices on each call. “While on the phone, the participants asked generic questions like, ‘How are you?’ and ‘What are you doing?’” Huffington Post reported. “By analyzing the participants’ tones, researchers discovered that people speak in a way that is more pleasant and sexy when speaking to someone with whom they are romantically involved.”

Men and women were both guilty of mimicking the pitch of their romantic partners while engaged in a phone conversation. Men spoke in a higher pitch to copy female partners, while women took their voices a pitch lower when talking to the guys.

The researchers believe this information could be used to detect infidelity.

While the study noticed a trend in voice pitch, it’s not exactly foolproof science. You may want to take it as a cue to become more aware of the people your spouse is interacting with, but a higher (or lower) pitch won’t necessarily mean your spouse is cheating.

2. Remember that it takes two.

Again, detecting voice patterns through infidelity is not an exact science. However, there is an important part of the research you shouldn’t lose sight of, and that is the other party involved. As the research states, voice pitch rose to match the gender of the partner. (Same-sex couples were not part of the experiment.)

This means that if the voice pitch alteration is simply one-sided, you’ve probably got nothing to worry about — at least, not from the other person. You may have a flirt on your hands, though, and that can be its own set of troubles.

As a service that helps others navigate the paperwork of an uncontested divorce, we’d like to hear from you on this topic — if you were the victim of infidelity, did you notice a change in voice patterns or any other “tells”? Share your comments with us!