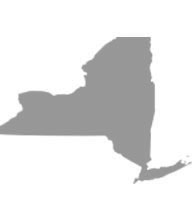 The petitioner must have been a New York resident for 1 year before filing for divorce if:

The petitioner must have been a New York resident for 2 years before filing for divorce if only one spouse resides in New York.

However, there is no residency requirement if both spouses were New York residents when the grounds for divorce occurred, and when the divorce forms were filed.

New York residents may file for divorce under fault or no-fault grounds.

Divorcing parents are allowed to collaborate on a child custody arrangement. If the parents cannot reach a decision, a New York court will make a ruling.

New York has adopted equitable distribution guidelines, which means all property (including gifts and inheritances) will be divided as fairly and equally as possible. Spouses may collaborate on the property distribution, but if they are unable to agree the courts will make a ruling.

"I have not finished the process yet, but it seems quick and convenient."

"It was simple and easy to use. As long as you have the information you get through the process with relative speed."

"The service is very thorough and self explanatory. Any questions are easily answered."